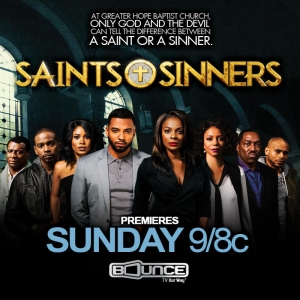 The show expects to rack up more sampling this week because Bounce, which airs on secondary digital channels of local stations, has made the show available to its affiliates for airing on their main channel. Bounce says 33 stations—in markets including Chicago, Washington, D.C., Atlanta, Detroit, Cleveland, Baltimore and Memphis—plan to air the episodes, most in primetime, prime access or early fringe, beginning Wednesday.

Bounce says that when Saints & Sinners aired at 9 p.m. on Sunday, it delivered 483,000 households, most for any program to date since the network launched more than four years ago. The show was re-run at midnight.

“This is a watershed moment for Bounce TV. Having a huge, record-setting audience tune-in for the debut of an original series and the show becoming part of the national conversation socially, with #SaintsAndSinners trending alongside The Walking Dead,Downton Abbey and the Democratic Presidential Debate, is a tremendous achievement,” said Jonathan Katz, CEO of Bounce TV.

Bounce says the show was watched by more African Americans than all but two shows on ad-supported cable: AMC’s The Walking Dead and Bravo’s Real Housewives. It topped BET and TV One by healthy margins, according to Bounce based on Nielsen numbers.

The show also popped on social media with #SaintsAndSinners trending nationally on Twitter and Facebook during the premiere.

Saints & Sinners is set in a large church in Georgia where a lot more than praying seems to be going on. It stars Vanessa Bell Calloway, Christian Keyes, Keith Robinson, Clifton Powell, J.D. Williams and Gloria Reuben.