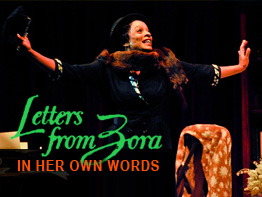 Through the dramatization of personal letters, LETTERS FROM ZORA explores Hurston’s controversial views on integration, segregation and social justice showcasing a life that was filled with artistic triumphs as well as abject poverty and self-doubt. Veteran actress Vanessa Bell Calloway plays the role of Zora in this provocative multimedia production directed by Anita Dashiell-Sparks and written by novelist Gabrielle Pina. With live music composed by Ron McCurdy and archival images collected by Margie Labadie, LETTERS FROM ZORA will illuminate Hurston’s prose, her life, her distinctive array of friends and foes and her unique view of a jazz-age world.

“LETTERS FROM ZORA is an untold story about the unbridled creativity of Zora Neale Hurston: writer, anthropologist, voodoo priestess and overall Renaissance woman determined to live and die by her own mind,” stated writer Gabrielle Pina. “This production offers a passionate glimpse of history, music, and artistry intended to illuminate her life, her extraordinary career and her immeasurable contributions to the American literary canon.”