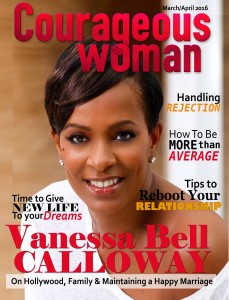 Vanessa Bell Calloway is a thespian who excels at ACTING, DANCING, and BUSINESS. Her triple threat game is incredible! With a sophisticated, very deliberate film career and theater background following her, it sure is refreshing to see her sustain; especially at a time when women everywhere are striving to carve out their footprints in the sand.

A working actress for over 36 years, including eight NAACP nominations and sold out shows at the Pasadena Playhouse, Mrs. Calloway has risen to the peak of her field through hard work, sacrifice, and dedication. This smart, yet very blessed, breast cancer survivor is usually found in the boardroom negotiating deals with game changing executives, including Bounce TV, who recently picked up her show “Saints & Sinners,” slated for release in Spring 2016.

CW: How have you been able to remain under the radar of social media, maintain a 27-yr marriage, raise two kids, AND sustain a successful film career?
VBC: Well, there are lots of things that contribute to this…I have been a working actress for over 30 years and for whatever reason, and it’s a blessing, I’ve never had a messy marriage or messy life. Therefore, my life is not interesting to people. Often the media only wants something messy or things they can gossip about. So it’s not that I do anything particular to stay under the radar, but I mind my business, and I don’t get into Twitter fights. My husband and I, we raise our kids, and I don’t bring unnecessary attention to myself. I have my nose to the grind; I love working and being with my family. I work out, I have my girlfriends, and I just do me.

CW: Would you ever do a reality show?
VBC: No. I’m not going to be on screen screaming and hollering, or throwing water in somebody’s face. I don’t condemn the people that do, but that’s not me. Besides, my husband Tony Calloway won’t have it! And I am trying to stay married and grow very old with my husband. After 27 years of marriage, we are still very much in love and connected.

CW: Have you ever been approached to do a reality show?
VBC: No, but my daughter did Baldwin Hills. She (Ashley) came to us and my husband told her, jokingly, “Well, BET will make you famous, but they won’t make you rich!” We laughed, but signed up and the way they came into our home was acceptable to us. They showed us as a family unit.

CW: Awesome! So what projects are you working on?
VBC: Currently, “Hand of God” is on Amazon and “Shameless” is on Showtime. I never wait for Hollywood to call, so when I have down time, I enjoy creating my own projects.

“In the Company of Friends” is a mature web series I created with a great list of stars. It’s a dinner interview that aired on TV One in 2007-2008 but didn’t get picked up, so I created a web series, shot it and put it on my website www.InTheCompanyOfFriends.tv
Next is the “Miki Howard Story”…I can’t wait to see that. I can already tell that I’m going to be proud of my work. I play Miki’s bipolar Mother Josephine Howard. It’s going to be really good! I was in that sweet spot and worked very hard, very direct, and very sincerely. I love the director, Christine Swanson! The DT, Tommy was amazing, and so was TV One!

“Saints & Sinners…” Now this is Bounce TV’s first original series. It is set in the church. I play Lady Ella, the lead of the show, like the matriarch, and in the first episode, my husband, the pastor gets murdered. Then it becomes a who-done-it. Of course people are doing more sinning than sainting. Great cast!

Next, I have a new show that I’m trying to get out this spring, it’s still being edited but it’s called, “Cooking and Hooking up… How to turn-it-up for fifty dollars or less!” I am teaching the younger folks how to entertain, cook, and buy things in $50 increments. I love to entertain, setting tables. That’s another one of my passions.

Last, “Letters from Zora.” Inspired by the works of Zora Neale Hurston is my one-woman-show written by Gabrielle Denise Pina and directed by Anita Dashielle-Sparks. It’s a beautiful piece about the over 1000 letters Zora wrote before she died. I’ve been doing it for four years now and I’m really praying that we get it to New York. It deserves the NY audiences and accolades of the NY theatergoers. I believe in it! And I’m damn good in it too!

CW: Have you ever auditioned for a famous role you didn’t get?
VBC: Yes but I don’t focus on, “Oh I didn’t get the part,” because sometimes you will look at a movie and see why the other person got it and you didn’t. I am a true believer that what’s yours is yours. The only competition I have is myself. I had to audition for mine too, but I just went in there, did my thing and for whatever reason I won out. Thank God!

Iyanla Vanzant once said, “To be great you must do the work.” Clearly, Mrs. Calloway did the work. Often times we look to others to validate and cosign our gifts and talents when like Mrs. Calloway, we need to just focus on doing us. Whatever that thing is burning inside of you, GOD has already equipped you with the tools to be successful. THE WORLD IS YOUR STAGE – GO GET IT!